The first thing you must know in regards to a vehicle over heating is that most modern cars use dummy gauges. A dummy gauge is a type of gauge that only generally reflects the actual data. For example, the coolant temperature gauge will show cold, normal and hot, but will not show the many temperature fluctuations an engine goes through while driving. The problem with this type of gauge is that by the time the temperature gauge shows a hot reading, the engine has already reached a very high temperature, and has in many cases caused major damage to the engine.

Next you must understand the anatomy of a modern engine. Modern engines consist of a cylinder block, and one or two cylinder heads, depending on whether the motor is an in-line motor or a V’ed motor. Generally, an inline four-cylinder engine looks like this:

Symptoms of a bad head gasket and or a warped cylinder head include:

Overheating while under load, cruising down the highway, or in stop and go traffic despite and otherwise working cooling system.

Rough idle at first start up after sitting for an extended period of time. While the vehicle is not running, coolant may drip into the combustion chamber and cause a misfire until that coolant is burned off.

White smoke out the tail pipe at first start up. Again, the coolant may drip into the combustion chamber while the vehicle is off, the burning of that coolant results in smoke.

Vehicle continually needing coolant added despite no visible leaks. The engine consumes the coolant and burns it; therefore it constantly needs to be topped off.

Hydrocarbons (a component of exhaust gas) in the cooling system.

Oil in the coolant, and coolant in the oil. If the cylinder head is warped badly enough, the coolant and oil will mix. This symptom is very rare, and only occurs in the most extreme case of a bad cylinder head gasket.

Here are the two worst over heats I have seen. An Audi that melted a piston, and a Subaru that melted the block! 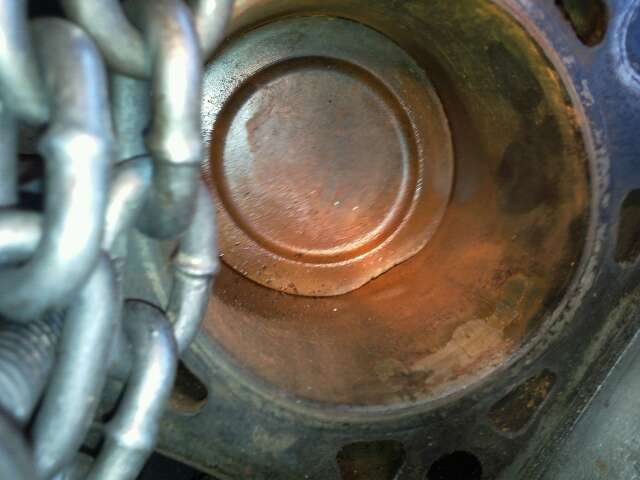 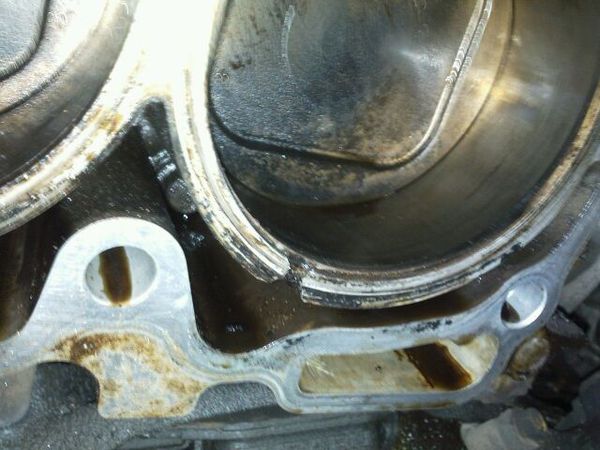 Once the cylinder head is removed from the engine block, it must be thoroughly cleaned and taken to a machine shop. The machine shop then inspects to see how much damage the heat has caused, because the valves and the valve seats may also warp due to heat. In the case of warped valves, not will the cylinder head need to be milled back to flat, but the valves may also need to be replaced.