So you have a battery that keeps going dead. You have checked all the connections and the cables. They are clean and in good condition. You have replaced the battery or tested it, and it is o.k. and it’s full of water.

You’ve gone on to check or replace the alternator. It charges over 13.5 D/C volts even with a load on it. The A/C ripple is less than a volt (Put a test lead from a volt meter on the positive terminal and the main power output on the back of the alternator, switch the volt meter to A/C. ) If the alternator and the battery are both o.k., and the cables are in good condition, you most likely have a draw. A draw occurs anytime something that should turn of, doesn’t.

To check for a draw, disconnect the negative terminal of the battery. The jump the cable to the battery with a test light such as this. 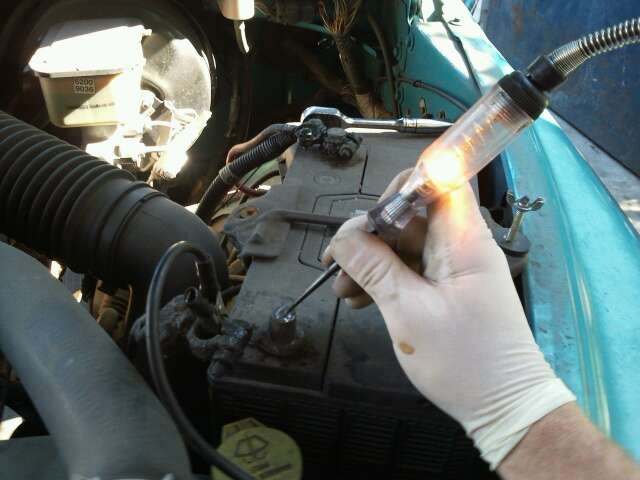 If the test light lights up bright like in the picture, then you have a draw. A draw of .03 amps is acceptable, so  if the test light glows very dim, you are most likely o.k. The radio, a clock, and some other items require a very small amount of power to retain their memory.

Assuming the light is bright,  and you do have a valid draw, next you’ll want to determine which circuit the draw is on.

Locate the fuse box. Generally there are two, one in the car and one under the hood. If you have your owners manual, it will tell you the location of the fuse boxes in your particular vehicle. Now simply remove  and install the fuses one at a time until the light turns out. The fuse the causes the light to turn off is the source of power to the circuit with the draw.

You can simply remove that fuse any time you want to park the car for an extend period of time. You can also look up all the items powered by that fuse. Email Scotty@clvr.tv with the vehicle information, and the fuse number, and he’ll send you a schematic for that circuit.

You can then proceed to unplug each item on the circuit until the light goes out. Presto change-0, that item is the source of the draw.  In most cases, the item in question has an internal failure which is causing it to stick on, but in some cases you may have to dig a little deeper.

I hope this helps, good luck, and happy motoring.