That being said, here are some tips to help ensure the proper installation of a timing belt and water pump. 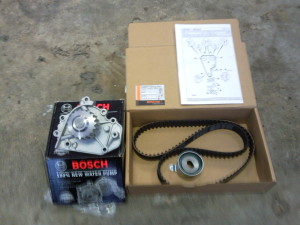 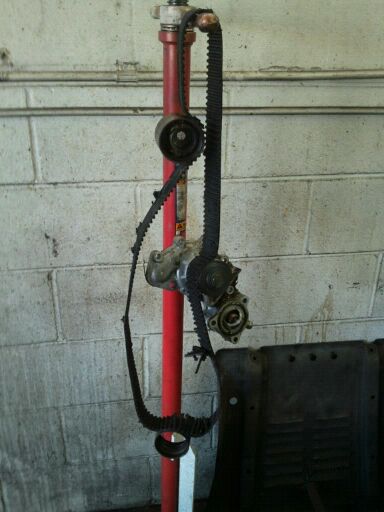 This is a timing belt out a Toyota that had an idle pulley come apart. The belt actually melted to the pulleys and water pump. Here are more examples of idle bearings having gone bad, it’s more common than you might think. 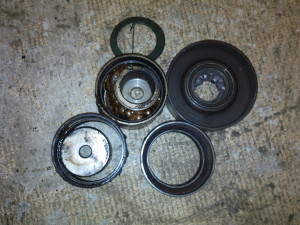 Once you have rounded up your parts, begin disassembling the font of the engine. On a horizontally apposed motor, I generally pull the engine mount on that side of the motor as soon as possible. Support the engine with a jack under the oil pan and you will be able to raise and lower the engine to allow greater access to lots of hard to reach parts.

Before you remove the drive belts, mark them as to what they run, and mark the direction they turn. Be labeling them, you by proxy note direction, just re-install them so that you can read the words (not up side down). 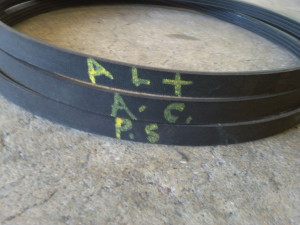 This will allow you to easily replace them whether re-using them or replacing them with new. If using new belts, you can match them up to the old to know which go where. If the drive belts are in good shape, putting them back on in the same direction they came off is better for the belts. Also, if a serpentine belt system is used, I draw a quick picture of the belt routing before removing it.

Your greatest challenge will most likely be removing the harmonic balancer bolt. On many cars, you can put a breaker bar on the bolt and secure the breaker bar somehow. Rest the bar on the frame rail, or against the ground. Then bump the starter and the motor will turn, but the bolt will stay stationary, thus breaking it loose. If you are working on a Honda or Acura, please note that these motors often turn the opposite direction of most motors and therefore using the starter to loosen the bolt WILL NOT WORK. You in fact need a high powered impact to loosen the harmonic balancer bolt. I bought a very high powered impact just for removing the bolt on Honda and Acura.

Your timing belt kit will likely come with a simple instruction sheet such as this. It will give you a general idea of how to install the timing belt.

To make things much easier I do the following. Run the motor over by hand to where the timing marks line up. Generally this will be with the number one cylinder at top dead center, but it varies by make and model. Look at the instructions and you’ll get a good idea of where the timing marks are. Once the motor is in the correct portion of it’s rotation cycle, mark the belt and the camshaft wheels, and note the direction. I also note the belt as old. The last thing you want to do is put the old timing belt back on. Honestly, a new belt and an old belt don’t look all that much different. 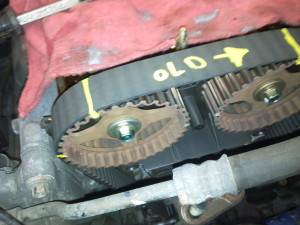 Then also mark the crankshaft gear. 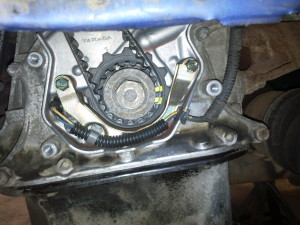 After the belt is marked, remove the belt, all the idle pulleys and replace the water pump. Now place the old belt on top of the new belt and transfer the marks. 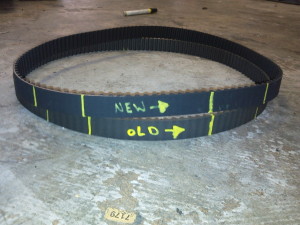 Installation of the new belt is now about as simple as can be. I use Boston clips to hold the belt on the camshaft wheels until the belt is completely installed. 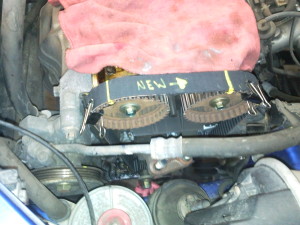 Once the new belt is on, rotate the crankshaft over twice by hand . Check again to see that the timing marks line up. As long as the timing belt still seems relatively tight, you can reassemble the rest of the motor. Fill the engine with coolant, using an airlift if available.

I always let the engine idle for 15 or 20 minutes before I drive it. Make sure the idle seems smooth and even. Then take it for a test drive and wrap the RPM’s up to redline. If the engine has been timed properly, the power curve will be even and smooth. If the car is sluggish down low and takes off up top, you may have retarded the exhaust camshaft a tooth. If the car has good power low in the RPM’s but then flattens off up top, check to see if you advanced an intake camshaft.

If you mark the timing belt as shown, you should never mis-time the motor. Good luck, and happy motoring.